translated by Sri AurobindoChapter One. I. Section

1. Hari OM. In the beginning the Spirit was One and all this( universe) was the Spirit;
; there was nought else that saw. The Spirit thought, “Lo, I will make me worlds from out my being”.

3.The Spirit thought , “Lo, these are the worlds, and now will I make me guardians for my worlds”
Therefore he…

How often do you create drama and chaos of a situation that is easy and effortless? When you being to gain a conscious awareness of it, you will be able to step back

Letting Go of the Old to Manifest the New

Salena Migeot, Newsletter from the Collective of Guides – February 21, 2014 | Thanks to Golden Age of Gaia.

We are loving you powerfully. You are becoming more and more empowered with every moment. It is in the highest good that you acknowledge that you have been handling the many changes occurring in your lives with much more exceptionality than you would have been capable of a mere six months ago.

You are transforming and evolving into higher-dimensional beings and handling an excessive amount of change within a very compressed amount of time. While many of these changes are not easy, they are all ultimately in your highest good.

It is important to connect into one’s heart and follow its counsel and to remember that some people are going through experiences in their present moment that require one’s empathy, compassion and understanding as they deal with their feelings in their own respective ways. Remember the love that lies at the core of their being and in yours and just let it be however it wishes to express itself. Some changes that occur in people’s lives are those that create a total revaluation of how one views their own and that can be a difficult process as it is experienced. At the core of all changes in one’s life lies a lesson of acceptance that not everything can stay the same and that events happen that leave a void that nothing can ever replace. In this, it is only the passage of time which heals these realizations.

Love in its many facets of expression is a most potent force and can heal even the most cynical of expectations. When love is held foremost in a person’s heart, the world conspires to bring one experiences that reflect that love. Allowing one’s heart to stay opened during times of sorrow and sadness assists in the healing process of each individual. Oftentimes, these expressions come from a place of woundedness within the person’s psyche and this allows the person to go within and examine these feelings with greater focus than would be given otherwise. It helps them grow and expand their understanding of themselves and others around them so that they understand that each person has similar events in their own lives that help shape them into more open and loving expressions of the Creator’s attributes.

Upon the foundation of love, anything and everything can be overcome. Into each person’s life come many events and circumstances which their soul has chosen to experience in order to align those areas within their own personality with the higher aspects of human expression. It helps them to connect with a power greater than their human selves can perceive and it is how they begin to understand that there is a greater force at work in their individual lives than they previously assumed. It is how the quality of faith begins to grow and expand within their awareness. This awakening of the knowledge of a higher power at work in their lives gifts the individuals with the capacity to endure life’s many trials and tribulations and imbues them with an inner strength that will never be lost no matter what events transpire.

With every life experience, each individual gains an important value that becomes a part of their repertoire of skills and tools which they implement in their lives as needed. It is only through one’s own experience that one can feel empathy and oneness with another. It is by this process that unity amongst all beings takes place. There is also the process that comes, with the giving to oneself, of love and nurturing that brings healing and release from self recriminations, guilt, shame and other feelings that have been holding one in a lower vibrational state and this can liberate the individual to move forward in their life in a symbolic new beginning.

Each life lived on Earth has great value and those who leave this plane of existence leave a profound imprint upon those in their sphere of influence. Those who are left behind must look for the gift that was given by their loved one in their associations and interactions with each other. Sometimes, these gifts can only be recognized through the passage of time and experience in the ones left behind. Every experience is utilized by their eternal soul to gain wisdom and expansion as a part of their soul qualities. This has been the purpose of life in a dualistic world, as souls experience the polarities of opposing forces and can still remember that core essence of love and light within them.

Permission is given to share this message as long as the message is posted in its entirety and nothing has been changed, or altered in any way and Scribe’s credit, copyright and websites are included.

Thank you for including the above website link when posting this message.

The collapse is coming and the reunion is imminent – Archangel Michael through Marc Gamma ~ 26.02.2014

February 2014 – SPACE – Long-lived sunspot AR1967 returned to the Earthside of the sun on Feb. 25th and promptly erupted, producing an X4.9-class solar flare.  This is the strongest flare of the year so far and one of the strongest of the current solar cycle. A movie from NASA’s Solar Dynamics Observatory shows the explosion hurling a loop of hot plasma away from the blast site: Coronagraphs onboard the Solar and Heliospheric Observatory tracked this material as it raced away from the sun, eventually forming a bright CME, pictured below. Radio emissions from shock waves at the leading edge of the CME suggest an expansion velocity near 2000 km/s or 4.4 million mph. If such a fast-moving cloud did strike Earth, the resulting geomagnetic storms could be severe. However, because its trajectory is so far off the sun-Earth line, the CME will deliver a no more than a…

February 2014– MALAYSIA –Authorities began rationing water to thousands of households in Malaysia’s most populous state Tuesday, as a dry spell depletes reservoirs across a country normally known for its steady tropical downpours. Much of Malaysia has been under bone-dry conditions for a month and high temperatures have left some reservoirs at “critical” levels, sparking an increase in bushfires and leading to protests in at least one hard-hit community near the capital Kuala Lumpur. Malaysia does tend to experience dry weather early in the year, but the current dry spell has been unusually long. The lack of significant rainfall has caused increasing alarm, particularly in the state of Selangor, which surrounds Kuala Lumpur, and adjacent areas, as meteorologists have warned the dry patch could last another month. Selangor is Malaysia’s most populous state and its economic and industrial hub. Water rationing in the state will affect an estimated…

February 2014– ALASKA – A 6.1 earthquake shook the Alaska communities of Nikolski and Unalaska Wednesday, according to the Alaska Earthquake Center. The strong shake occurred around noon in the Bering Sea region of the state. The center says the earthquake had a preliminary magnitude of 6.1 and was located at a depth of 23 miles. The towns, located near the mid-section of the arc of the Aleutian Islands stretching more than 1,000 miles toward Asia, reportedly didn’t suffer any damages. Quakes with magnitudes of about 4.5 or greater are strong enough to be recorded by sensitive seismographs worldwide. Great earthquakes, such as Alaska’s 1964 Good Friday earthquake, have magnitudes of 8.0 or higher. The U.S. Geological Survey says that on average, one earthquake of that size occurs somewhere in the world each year. –AD 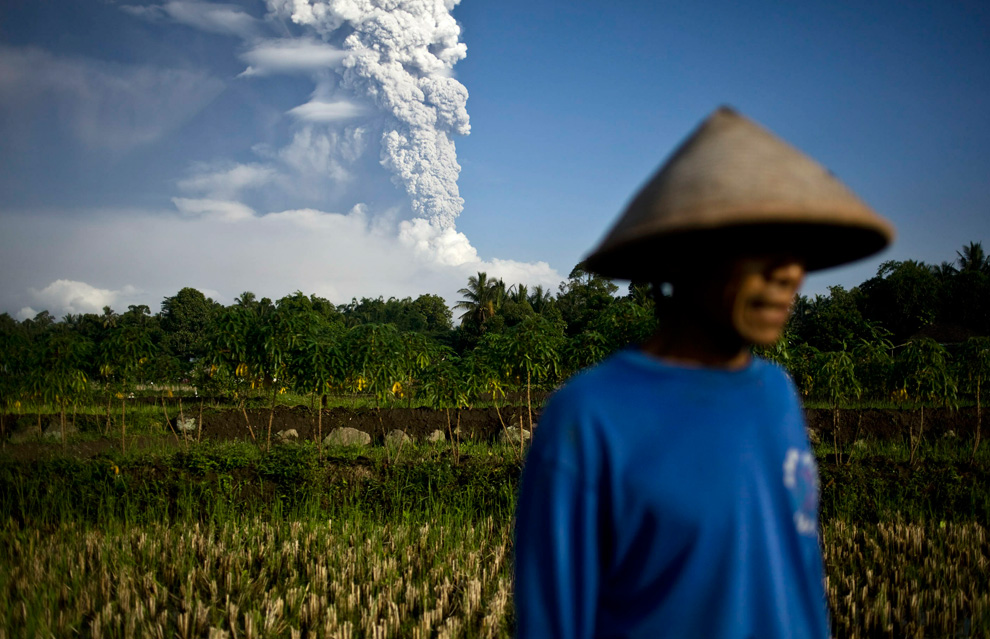 February 2014 – INDONESIA– Another ash eruption occurred at the volcano this afternoon at 16:15 local time. According to local news quoting the local VSI volcano observatory spokesman, the eruption today was the largest in a series since the alert status had been raised on 3 August last year. Ash fell in a radius of 3 km where some villages are located. Also according to the article, the volcano has had a total of 57 recorded eruptions since January 2014. Since all of these have been small, and Indonesia is very used to small volcanic eruptions, they hardly make any news at all (while such an event at other volcanoes would). The alert status remains unchanged at 2 out of 4. People were recommended to avoid exposure to ash if possible and wear dust masks. –Volcano Discovery

February 2014– ALASKA – Researchers detected two small explosions at Cleveland Volcano on Monday afternoon and early Tuesday morning, according to the Alaska Volcano Observatory. The first occurred a little after 5 p.m. Monday and the second at 1:35 a.m. Tuesday. The AVO said the explosions were brief, and were detected by infrasound and lightning alarms. A small ash cloud — the presence of which was confirmed by satellite — was estimated to be drifting at an altitude of about 16,000 feet above sea level. “These explosions are typical of eruptive activity of Cleveland over the past few years,” reported AVO. “There may be a heightened chance of additional ash emissions in the coming weeks. Because these explosions were brief and there is no sign of ongoing eruption, Cleveland remains at Volcano Alert Level/Aviation Color Code YELLOW/ADVISORY.” The 5,676-foot peak [3], also known as Mount Cleveland, is in Alaska’s… February 2014– COSTA RICA – The crater of Poas Volcano expelled material 300 meters into the air at noon on Tuesday. The phenomenon, called a phreatic explosion, occurred due to a reaction between magma and water at the southern border of the lake inside the volcano. However, this was not an eruption and the volcano did not spew lava. Instead, a column of steam, gas and other materials formed and spouted out the top of the volcano, confirmed the Volcanological and Seismological Observatory of Costa Rica (OVSICORI). María Martínez Cruz, a volcanology and geochemistry expert with OVSICORI, said the event can be considered “normal for the volcano’s activity, although explosion heights like the one recorded Tuesday are not that common.” This type of explosion, called phreatic, occurs when the volcano’s magma contacts water in the crater’s lagoon and evaporates quickly through fissures. That action results in an blast of…